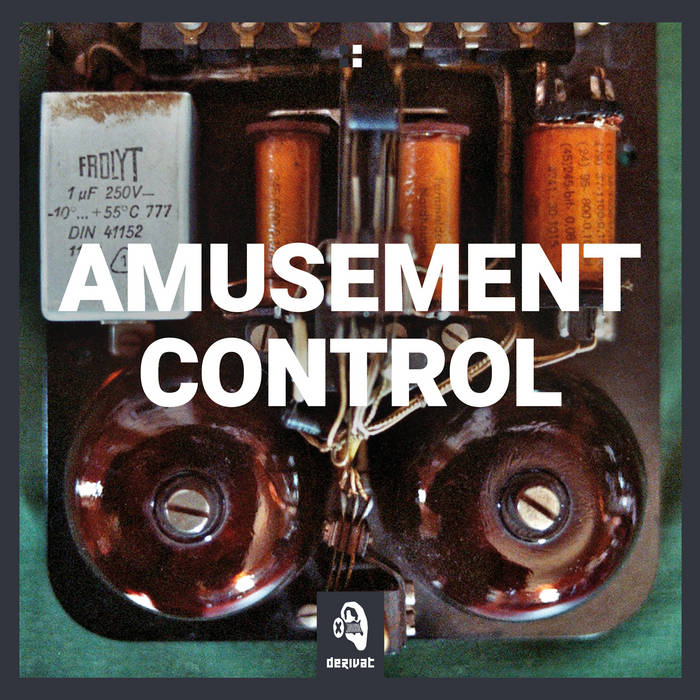 Work on »Amusement Control« started while DE3IVAT were working towards their EPs 3 (Accelerate On Stalemate) and 4 (An Exercise In Alibis) earlier this year. Of the many sounds they collected especially at Prora’s site of Nazi’s megalomanic dream of a worker’s holiday resort and at MUNA in Lübberstedt, where, again, the Nazi’s had one of their many ammunition factories and concentration camps, were not few that reminded the collective of late 1970’s disco era. Recognising this curious incident a not less curious idea hatched: what if they dedicate one EP to that specific dance sound of the time? Therefore, the tracks »Rapid Response« and »Hearsay Evidence« (tracks 2 and 3 respectively) bear audible prove of their effort. And it’s from the completion of those tracks were the EP got its very ambivalent name »Amusement Control«.

Late in production process came the EPs central track »2nd Handed Hoax« which managed to fuse DE3IVAT’s core themes into one major song. The collective is a huge fan of Alexa and Alexander Waschkau’s podcast »Hoaxilla«. After listening to their episode about Number Stations way back in 2016, they looked for a way to integrate the ambivalent magic of those voices transmitted by short wave radio stations into the DE3IVAT soundtrack. When Christoffer & Mirco coincidentally got their hands on a copy of a Stasi training-film from 1988, the realization of the idea was to be set in motion. In 2014, their parent project T3AFO set out to gather images and sounds at before mentioned MUNA in Lübberstedt and here they found all of the sounds (and images) that would composed the right soundtrack and video for melting all ideas into a result that the collective considers as a DE3IVAT classic. The Russian number station »G06« (as indexed by The Conet Project, a loose world-wide collective recording and archiving as many number stations as they are able to gather) calling the agent »9-4-7« in German language was chosen for incorporation of the track, forming the chorus-part. The voices for the two verses were edited and composed and tuned into rappy vocals from the male and female narrators of the Stasi training-film, speaking typical phrases of a language used in illiberal societies then and now. Like a puzzle DE3IVAT put word upon word and thereby found, that the words could be arranged in any way always producing just another phrase of authoritarian propaganda.

The accompanied video to the track again fused the resulted soundtrack with images of uniformity and utter destruction, a camera in search for »9-4-7« in a desolated military environment which is also a resort of wild nature. The ambivalences of horror and beauty on vast display. Great »Amusement Control« in deed.

»Rapid Response«, track two of the EP, took its basic idea from the sounds of rusty squeaking doors found at the remains of »Kraft durch Freude«-resort of Prora. The squeaking was simply produced by randomly moving the door back and forth. The sampled recording featured seven different types from which four way taken to form the intro of cliché-laden four-to-the-floor beat. Falling stones and other items hitting stairways, hallways and walls produce another layer of the all-encompassing rhythm track making the late-1970’s sounding pastiche of disco a perfect irony. A simple melody produced by mostly analogue synths from the same era create an irresistible pulse, seducing the listener to dance all the horrors of the historic place away. The question begged »is that allowed?« lurks in the back as the track abruptly ends and gives way to silence. The listener in responsibility imagining her or his own »amusement control«?

The following track »Hearsay Evidence« is a track that was composed and produced like in a five-piece-band’s jam session. All kinds of sounds from DE3IVAT’s vast archive that sounded interesting to them, but could not be used as a single basis for a track were loaded into their samplers and performed mainly live to yet another mid-tempo stumbling four-to-the-floor disco beat. In a time, where classic discotheques are a dying culture of amusement, the track bids a merely non-melodic farewell to the romantic ideal of »dancing the troubles away.« Today, fact-based reality is again fighting against all kinds of conspiracy belief systems that make »Hearsay Evidence« an imagined parallel reality for some. Escapism at its worst. DE3IVAT incorporated this by editing down the rhythms from the 4/4 beat to measures of 2/4 now and again making the dance stumble. Something seems not so pleasant and right here even though the overall music seem to suggest it.

Closing the EP is »The Velocity Of Capital« which is meant to be the musical representation of another parallel reality, that of capital and stock markets. No numbers here in the music (in fact »2nd Handed Hoax« is the only track featuring voices on this EP), but cacophonous layers of noise and acoustic chaos. Recorded again at Prora, the majority of the soundtrack comprises buckets found in the apartments, falling down the various stairways thus forming a unique rhythm of the unexpected. The rhythmic chaos in the final section the track is just as organic as the stock-markets of the world appear in their daily actions. Having little to do with reality as the calculation of controlled possibilities.
Once again an »amusement controlled« playground of imagined reality.

DE3IVAT see the musical results of »Amusement Control« as a eventual opportunity to thank and dedicate their audio sculpture to artists, musicians and podcasters they admired and followed over the years and cite their influence. Some of them no longer among us, yet still vividly alive as »Amusement Control« provides.