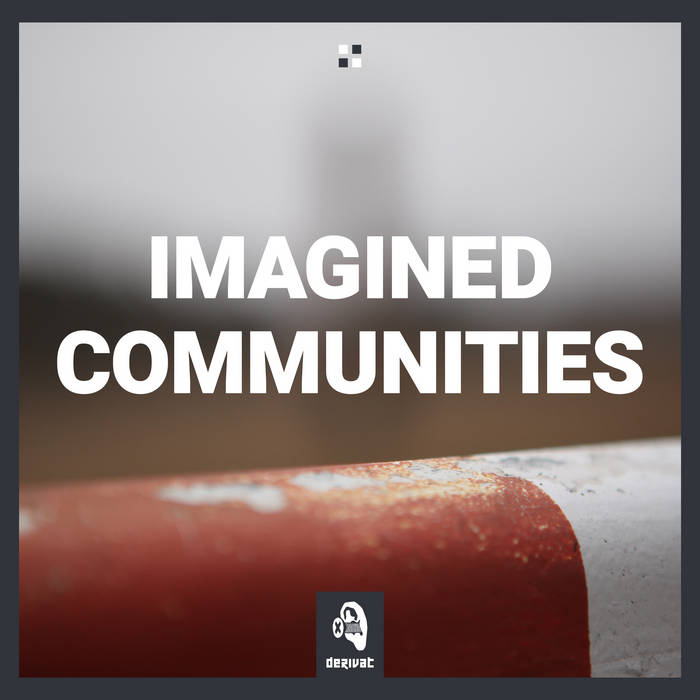 On November, 29th, DE3IVAT release their collaborative EP »IMAGINED COMMUNITIES«. It is the final installment in a series of six four-track-EPs released in the past 18 months. As with the previous five EPs »IMAGINED COMMUNITIES« will be available worldwide through all major music streaming services and in high definition format on their record companys website.

While DE3IVAT are already in preparation bringing their music and sound scapes to the stage, the highly experimental and collaborative new EP »IMAGINED COMMUNITIES« concludes a cycle of six EPs the project produced and released in the past 18 months. The included four new tracks are collaborative works throughout, incorporating people as diverse as an inclusive music/stage ensemble as well as musicians, voice artists and actors. This extends further to the accompanied video for »CLIMATE CONTROLLED CONFLICT« which will be released January 2020. The inclusion of a visual artist was just consequential to bring the at times spooky voice-over narrated track to the big screen. Susanne Moldt, painter and sculpture artist brings with her printed works of patterns and grids just the right mood and flow to a track that juxtaposes what is the debate of man-made climate change: The voice of reason in contrast with the voice of conspiracy myth nowadays found anywhere. »Are we really damned to start with all the scientific discoveries from scratch again?« the tracks seems to beg.

DE3IVAT decidedly took local collaborators into account and let them become actively a part in creating the sonic sculpture. While DE3IVAT celebrated their IDM-influenced and ambient-laden output on their previous material, »IMAGINED COMMUNITIES« brings in various new elements. With »CLIMATE CONTROLLED CONFLICT« and its time-signature of 7/4 they are exploring new grounds of polyrhythm without actually being very rhythmic at all. The dub-infected, yet spare industrial percussive sounds actually leave just enough space for the listener to realise what the narration is saying. And just a the very moment the listener found a way in, the voices create overlaps, don’t listen to one another anymore. It’s as if an element of absurdity is at work here when all voices are finally intercepted by a streak of distorted noises. No answers here, just questions - and questions marks. Then, at the end, the dance element sets in again but instead of creating a soft relief, the narration whispers about Angst (German Angst?), Zweifel (doubts) and Spekulation (speculation) what makes the listener hardly move let alone dance. The track ends as it begins: spare, almost still, with questions hanging in thin air.

»THOSE MADE RESPONSIBLE« had its basic stems produced a year ago while DE3IVAT were busily working on their third EP. It was stored away, and it was doubtful if it would ever find its place within the DE3IVAT universe. Then, the percussion-driven musicians of »drumpandoo« entered the scene, asking Mirco of DE3IVAT to co-produce/mix their debut mini-album »Friendly Gravity«. Themselves lovers of sound, the band performed some extra spontaneous material for DE3IVAT to pillage and plunder and it turned out it was just the right ingredient to bring »THOSE MADE RESPONSIBLE« to life. A multi-layered sound experience to enjoy, even relax to without losing its experimental spirit.

»ECHELONS IN FEUILLETONS« was the track that defined the overall idea of »IMAGINED COMMUNITIES«. The song was composed and recorded back in 2018 out of the idea to have gifted and inspiring guests on a DE3IVAT track. Christof Schlaak is an excellent piano player who paid his duties for the slow-tempo, experimental post rock band »CMDR RIKR«. Minimal and spare in its approach, Christof composed for and performed on both a grand piano and a Kurzweill digital synth onto nothing but a rhythm line provided by DE3IVAT. Inspired by what Christof brought back from his journey, DE3IVAT expanded the final track around his finely wrought chord textures. A DE3IVAT signature element, a found voice of a female blackmailer calling herself Sam, found its space when the track is almost brought to rest in the middle. The german-ness of the final words »Ende der Durchsage« give way to the beautifully arranged climax. Rumours are heard that this might not be the last collaboration with him.

The final track is also the final track in this cycle of songs spread over six EPs, and it is the track that makes its mark. Composed and performed in a spontaneous session with and in the studio of the inclusive music ensemble »Bluescreen« of Oldenburg, all dynamics are tested to the max. DE3IVAT recorded the full four-part session multi-tracked and, now and then, grabbed an instrument themselves and performed with »Bluescreen«. The gathered material was then sifted as in a gold mine, bringing out a new track, edited in the spirit of CANs best compositions, jumping fearlessly from one style into another - from full blasts of sound to eerie silences. An apt way to bring DE3IVATs first major endeavour of twenty-four songs on six EPs full circle.

Now the band is setting up and preparing for live in 2020. If it all continues to work fine, they said, there is a vinyl album underway. A lot is in store for such a promising audiophile project that found its way to earth in pure joy of creativity. Just how it should be.

»IMAGINED COMMUNITIES« will be available November 29th 2019 on all major streaming services and in high definition audio on the labels website.